The Roxy – Home Cinema and Bar

The Pyramid Group / The Roxy – Home Cinema and Bar 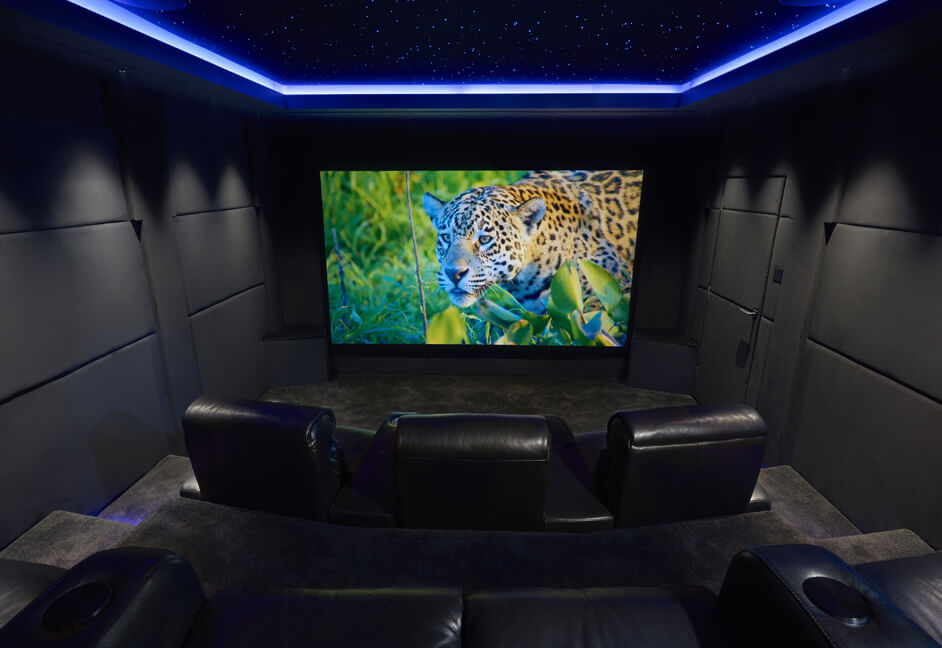 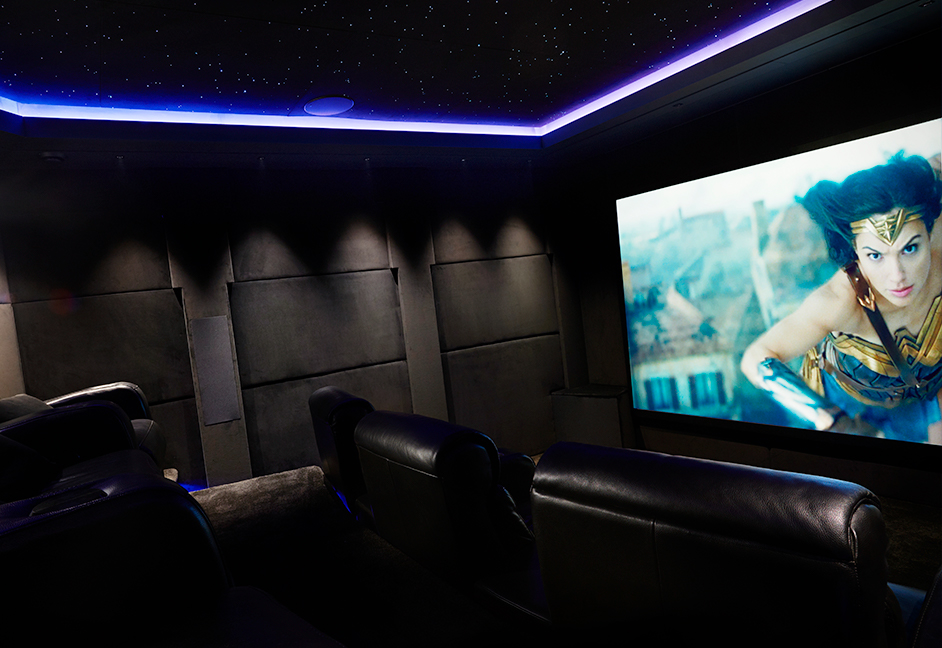 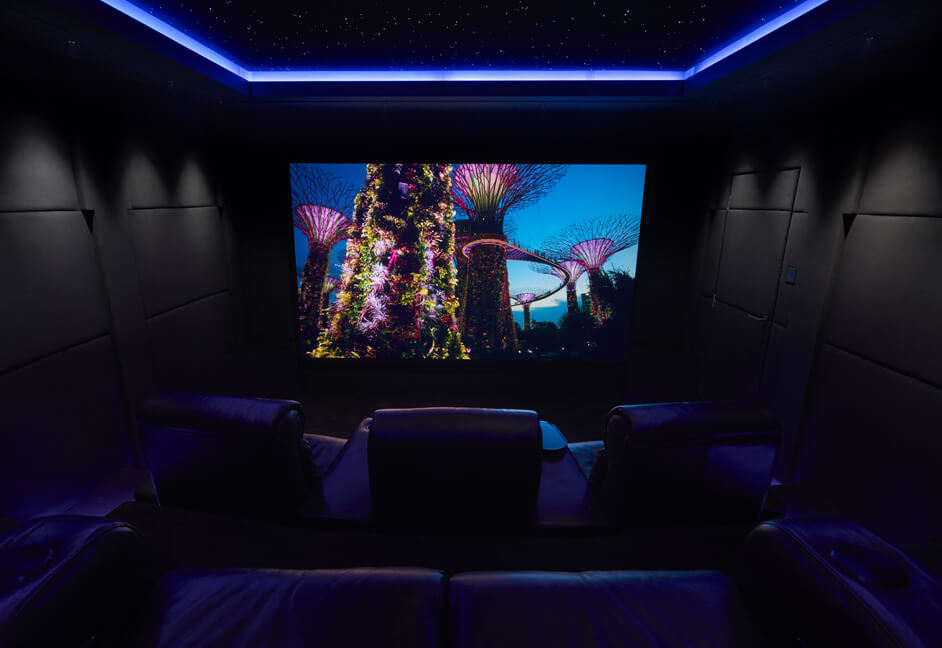 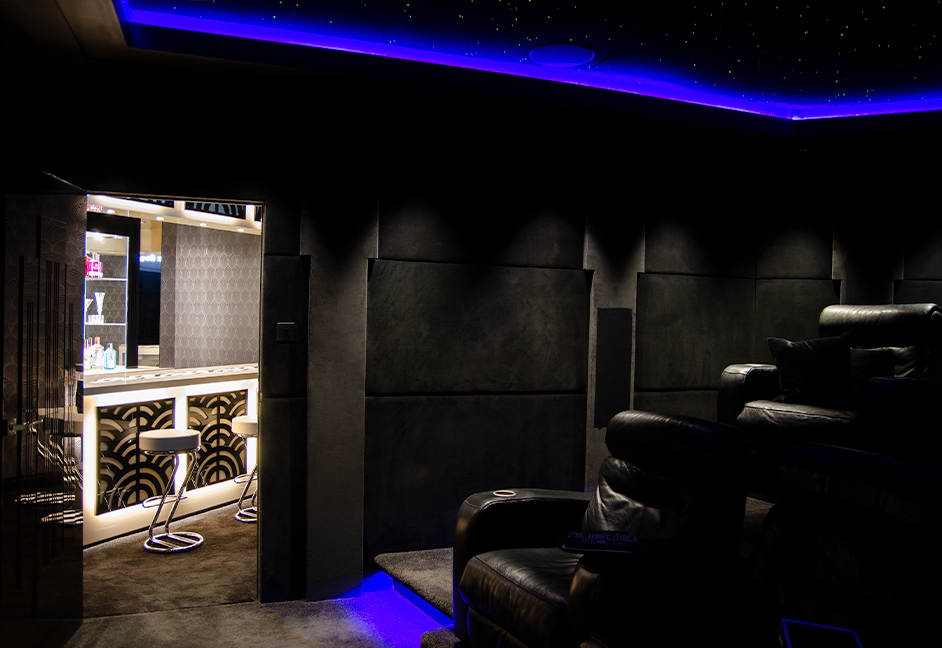 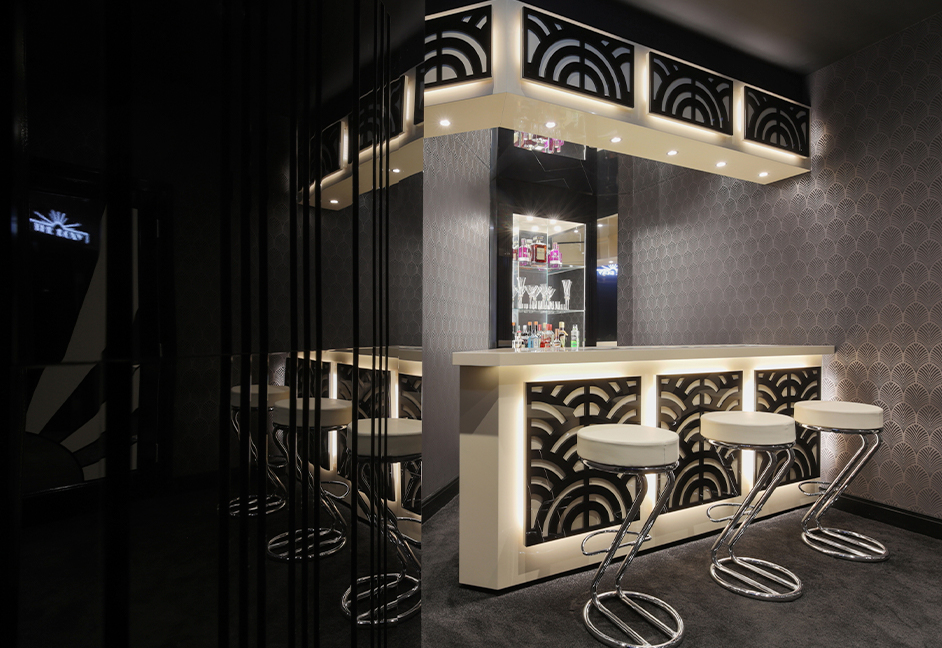 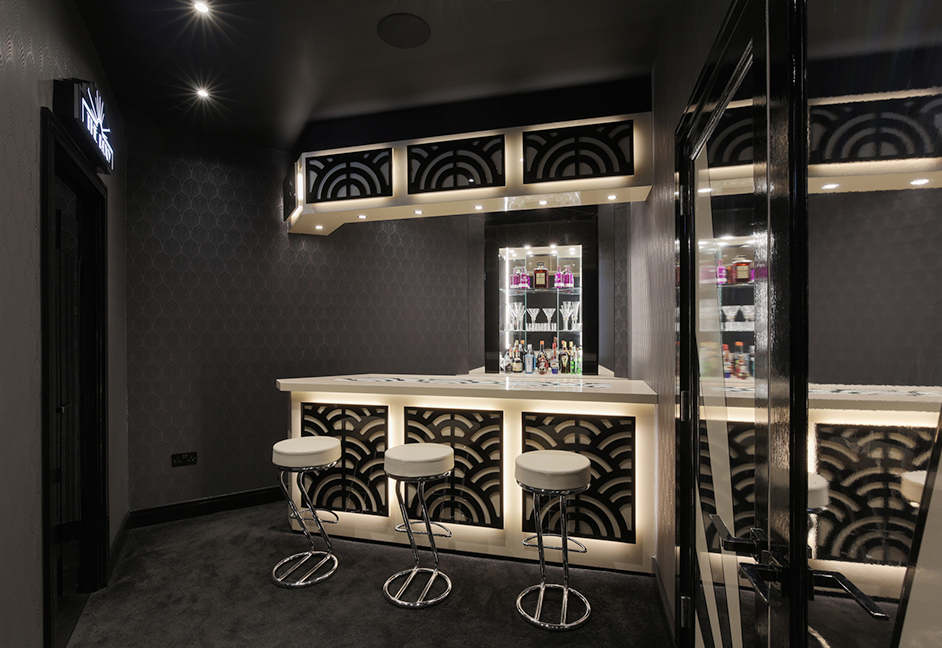 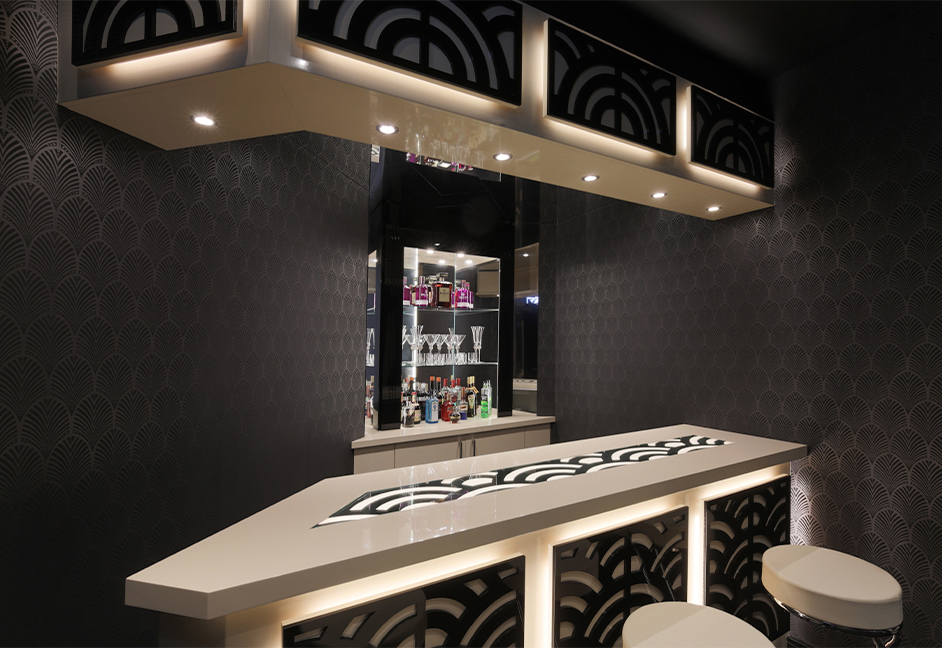 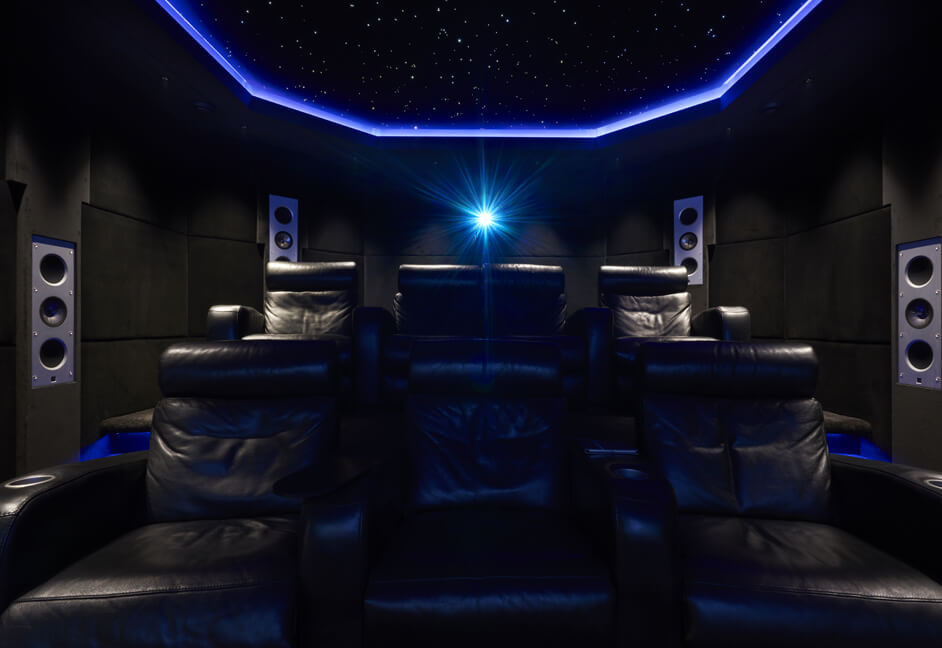 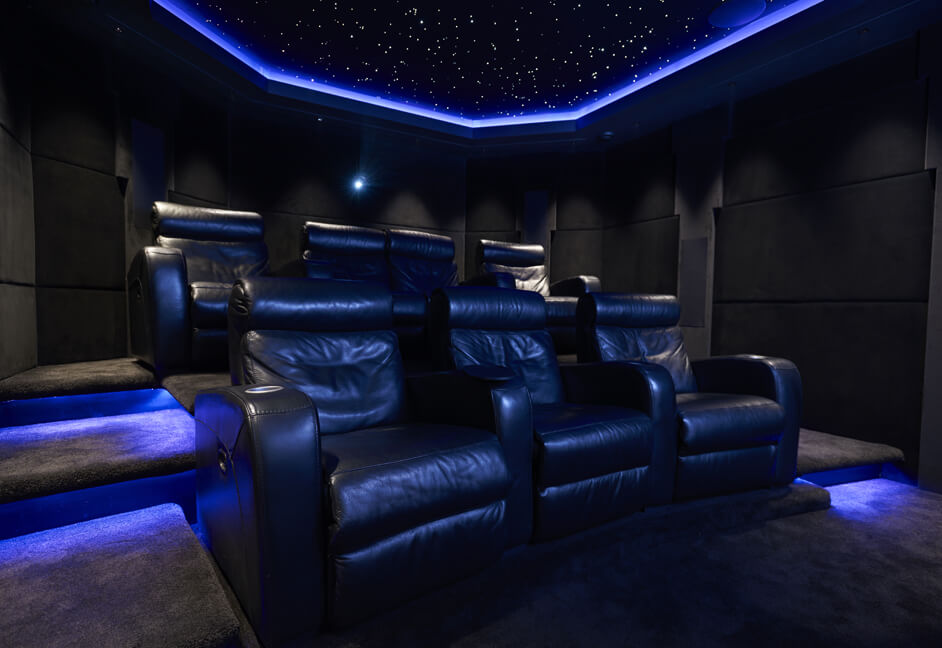 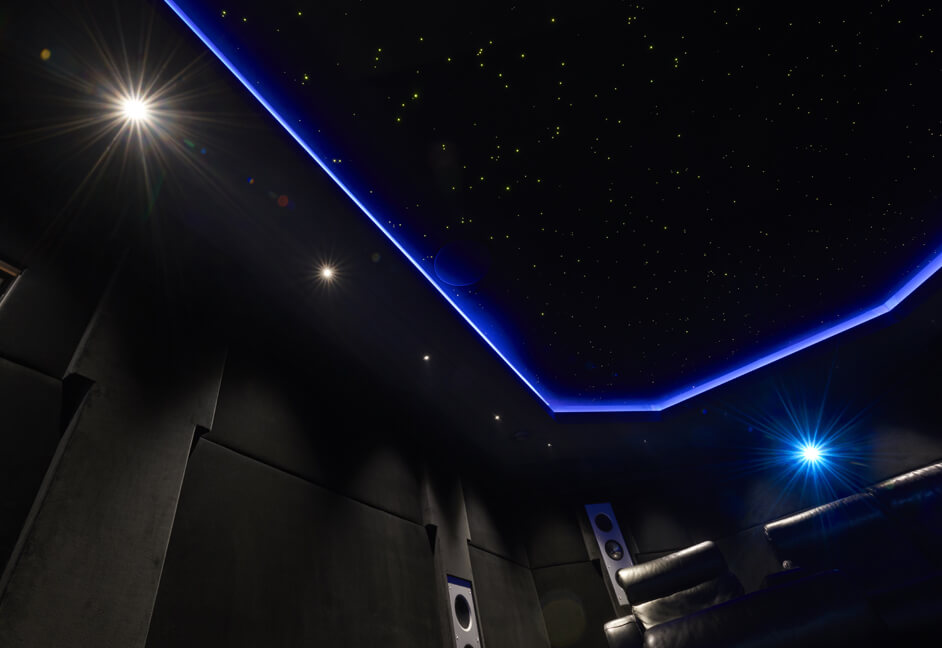 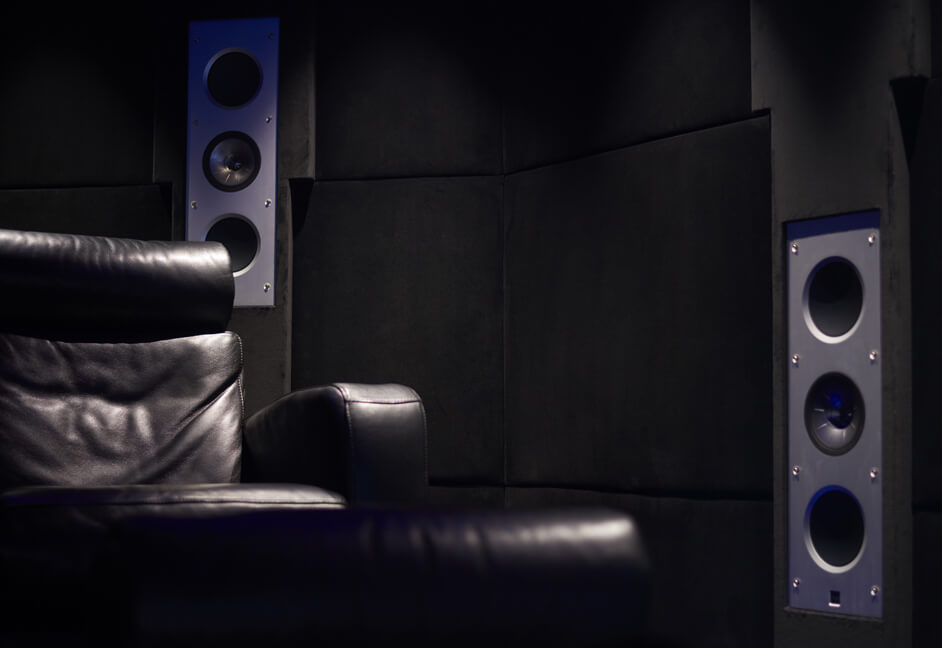 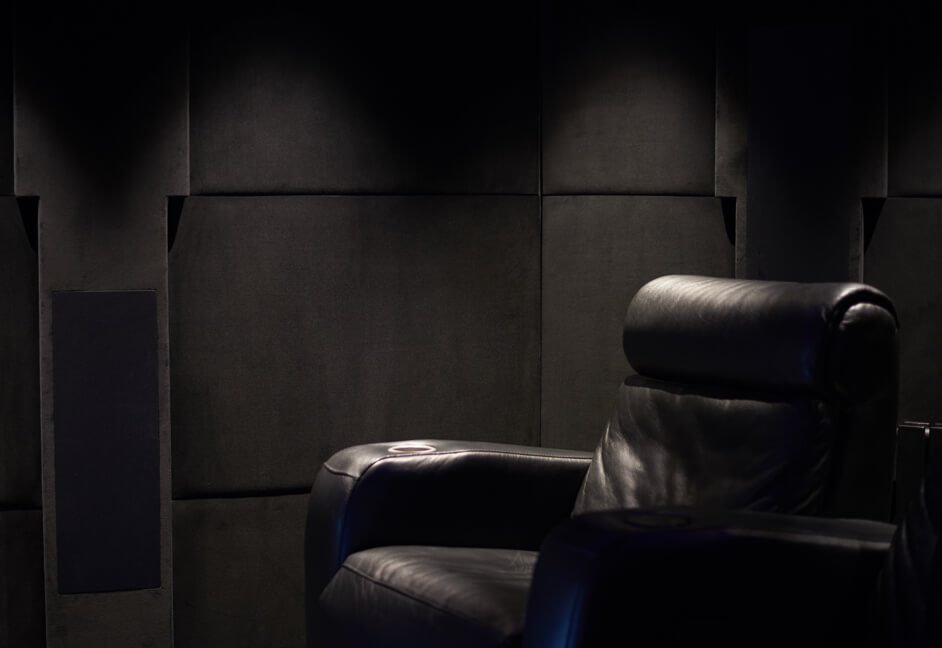 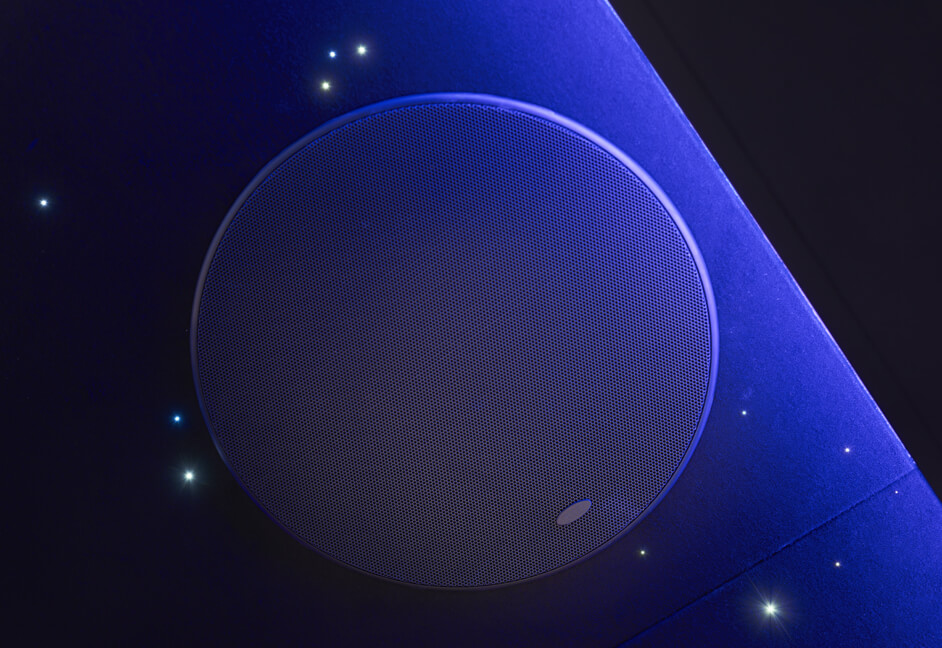 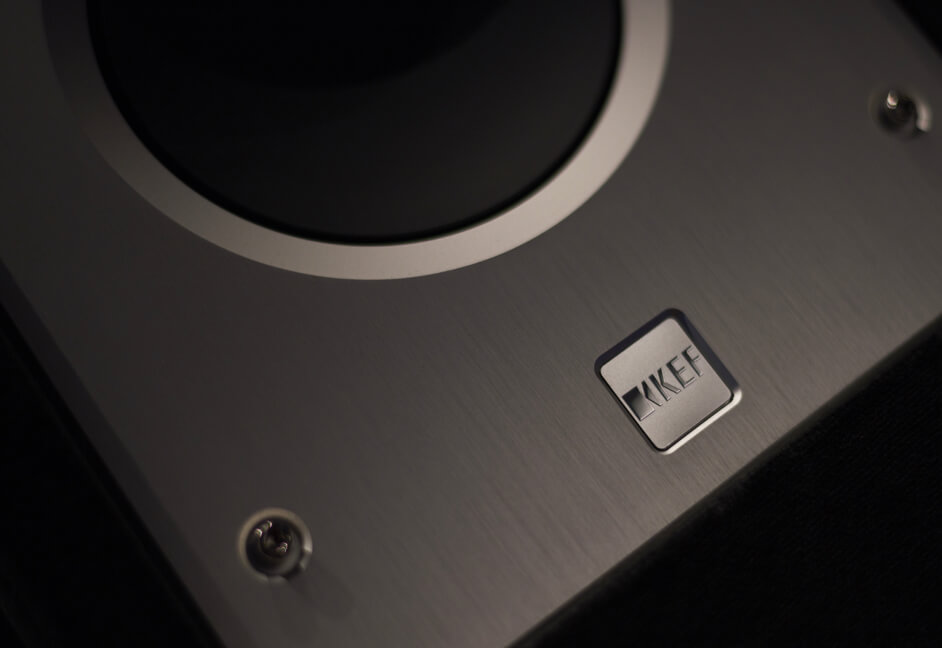 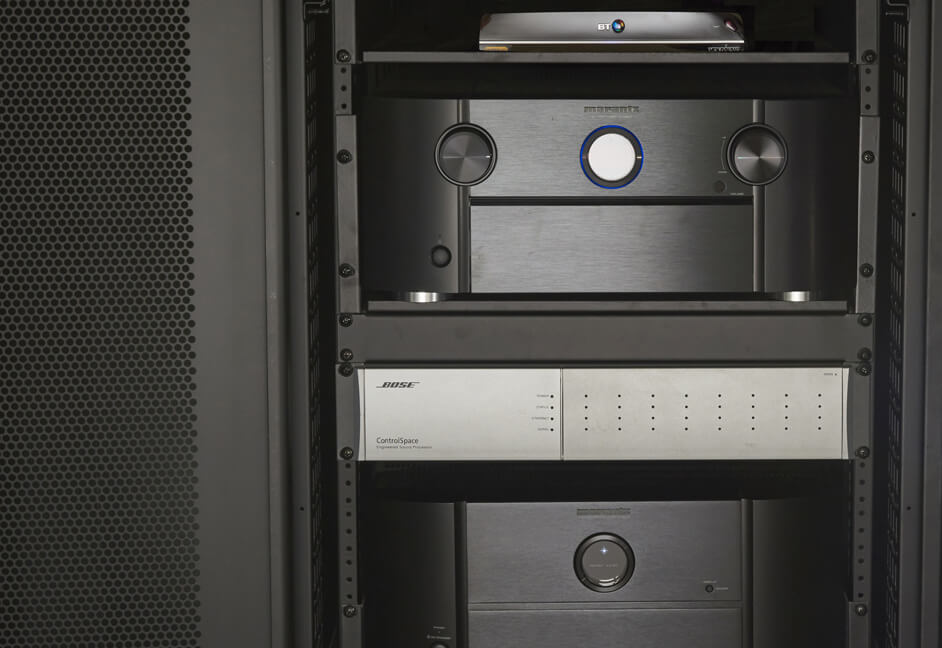 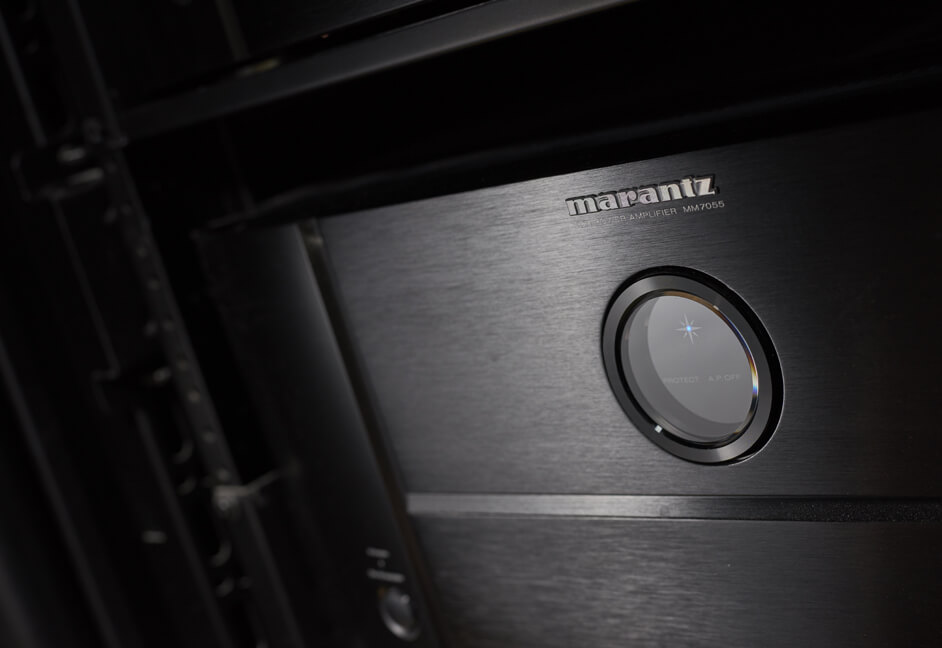 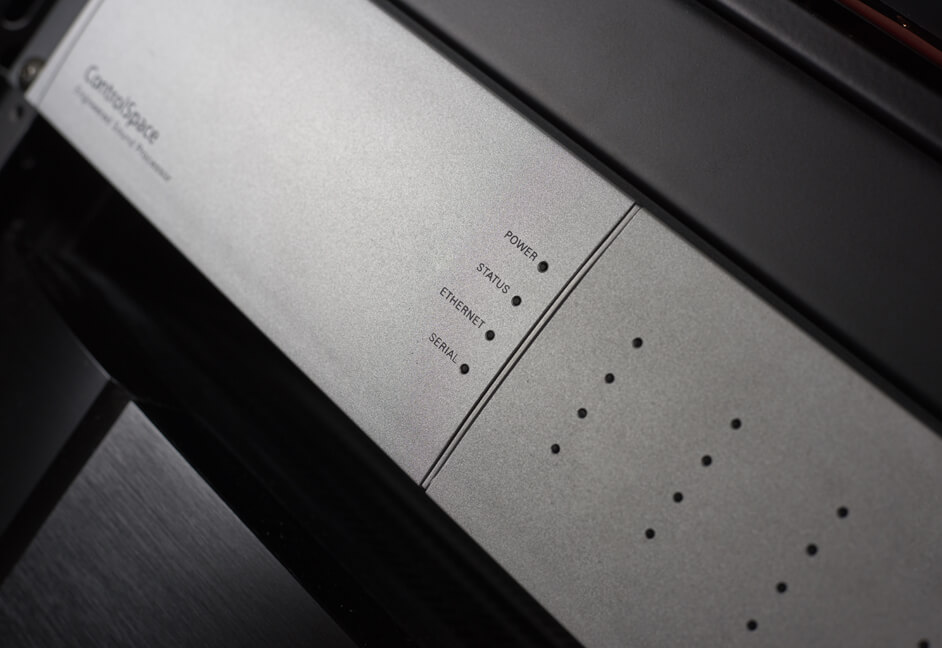 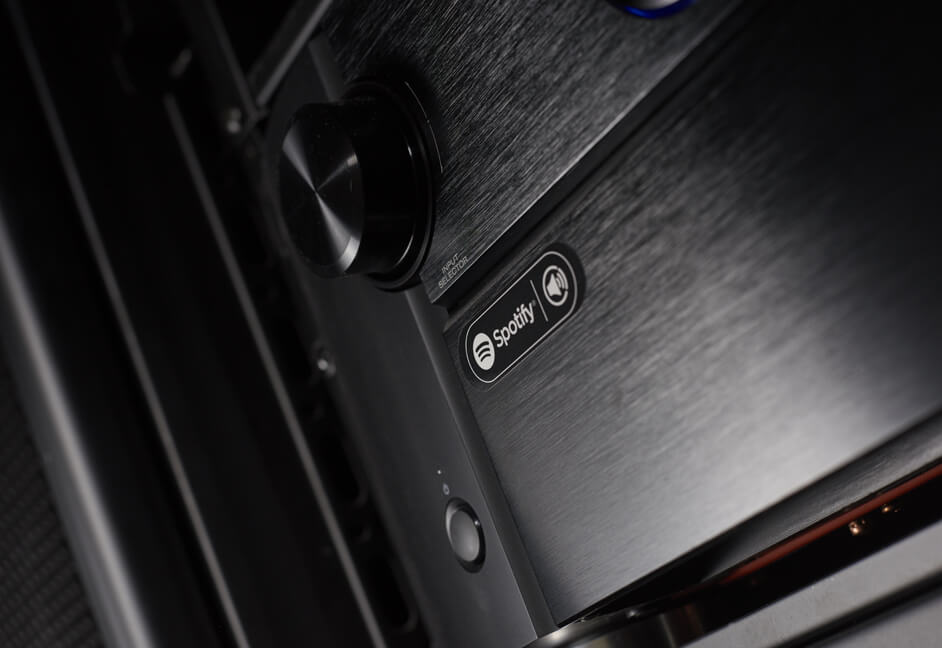 The Roxy – Home Cinema and Bar

The Roxy Cinema was conceived as a design and build project incorporating an unusual space within the basement pool area of a large existing property. The clients were intent on creating their dream cinema alongside a new bar area within this unused space.

A number of challenges existed with this home cinema and bar project;

The room configuration was of a ‘wedge’ shaped space that we had to split up in order to maximise the potential cinema requirement as a dedicated space.

After a number of trial configurations, we settled on the final design, with extensive input from the clients as they were very particular about every detail involved.

One thing that was clear from the outset was Bruce’s steadfast intent on having a fully black room whilst Hilary was keen to introduce a style that was art deco in essence, along-with a star ceiling effect. Our designs successfully accounted for both requirements as we were able to combine a style of décor that was consistent with the notions of 1930’s cinemas, but at the same time ensuring that good lighting design and systems control allowed for a fully controllable environment.

The spec was to fit two rows of seating within the room, of which the client had already procured the Front Row seating configuration, providing for a seven seat cinema.

The second part of the challenge was the new bar space to enjoy drinks and nibbles before watching a film. The client was very keen to keep to the 1930’s / Art deco theme that had already been implemented in the cinema, but they wanted the bar to have its own “wow-factor” and be a real statement space. Our clients use both the cinema and bar most evenings and it’s the perfect space to play host to their friends and family here before their movie nights.

The audio system chosen was a 7.2.2 Dolby Atmos system as the Client was less concerned with the overhead effects of 3D audio, and post commissioning discerned a preference for a more direct sound emanating from the screen when listening to music, as opposed to an ‘upmix’ of stereo content to a pseudo-surround mode.

Audio performance objectives were set out to achieve PEAK SPL 105dB(C) reference level at the listening position, taking the THX reference level of 85dB(C) and allowing for the requisite 20dB of additional headroom to enable the accurate reproduction of transients.

All of the cinema’s speaker and audio designs are in alignment with the guidelines for Dolby Atmos configurations as well as incorporating the CEDIA whitepaper guidelines for loudspeaker placement for immersive audio.

The client was very specific about the choice of loudspeakers, being an ardent opera and classical music listener as well as a movie enthusiast.  We arranged for Hilary and Bruce to attend a number of system demonstrations and after some consideration it was clear that the KEF Ci series of in-wall loudspeakers were the desired model.

The choice of sub-bass loudspeaker was also a matter of great concern. After considerable research and listening on the subject, Bruce decided on a pair of SVS Ultra SB13 self-powered units and a left right screen orientation which we were able to account for within our calibration and tuning process.

Crossover facilities for the Ci5160 L,C,R loudspeakers were provided by inserting a Bose ESP880 DSP into the signal chain, post the AVR LCR outputs.  This also enabled precise set-up of the L,C,R before calibration, giving us an extremely accurate platform from which to balance the rest of the system.

After a period of demos involving our own dedicated demo cinema within our showroom, visits to a variety of other demo cinemas offered by distributors across the South of England, the debate settled on a 1.78:1 ratio screen at 135” diagonal. It was a compromise based on the identification that the client’s tastes were varied in terms of content, and as such they felt that they wished to maximise the opportunity for a wide range of ratios, in addition to the cinematic experiences offered by a 2.35:1 set up. TV, DVD, Bluray and home videos were all part of their collection so this decision was based on a sensible compromise.

Video performance was designed to meet with THX cinema standards.

The projector chosen was the JVC DLA X7900 offering 1900 lumen output, plus E-shift 5, 4k capability. This projectot met the client’s particular requirements on the image quality, as well as the ability to alter frame rates to accommodate his sensitivity to motion jitter.

Importantly, the fact that the room was black and the selected projector has excellent contrast ratios, the chosen 1.78:1 screen ratio ensures 2.35 content is displayed with the best possible contrast around the screen margins, almost negating the white borders top and bottom as a result.

The end result is a fantastic picture that accounts for all media in an almost perfect viewing environment.

The acoustics of any space have to be fit for purpose, and the acoustic design for The Roxy Cinema was intended to be as tight and accurate as possible.  The room was modelled in EASE to determine a pre and post build RT60, which determined the choice of materials and methods of application.  Particular attention was paid to the structure of the screen wall to ensure very rigid loudspeaker mounting and to minimise interference to the wavefront leaving the loudspeakers.

Bruce and Hilary were obviously eager to have a great sounding cinema, and had some very specific design requirements, both aesthetically and sonically.

The audio in the room is incredibly well balanced, speakers blend into one cohesive sound field with no perceptible point source, the bass is very tight and accurate and the system headroom creates the necessary dynamics that this environment needs. The net result is that the room disappears, leaving the content to envelop the audience as it is intended.

What they did not expect was for the system to not only perform so well as a cinema, but also for listening to music. Bruce however now spends a great deal of time in the room listening to his favourite music, which he says ‘far exceeds my expectations – it sounds fantastic’.

We believe that a great sound system should be fit for any possible use, and aim to provide the client with a stunning, immersive hi-fi as well as the ultimate cinematic experience. Home Cinema Choice magazine also agree’s as The Roxy home cinema and bar was chosen as the featured ‘Dream Theatre’! Read the article.

“In picking what equipment we should have for our home cinema we had two problems:

1. All but breathtakingly expensive built-in speakers sounded to me no better than fairly inexpensive cabinet speakers, with the bass neither full nor well integrated to the mid-range.  Yet we wanted to achieve a built-in look.

2. I am one of those people who experience cinema at 24f/s as jerky, so, while I love films, I have always taken care not to sit too near the screen, so as to avoid movement looking too much like a succession of stills.  In a room of our size this presented potential problems.

We solved the first issue by the designers arranging for us to listen to numerous systems. Finally we opted for what sounded to me like good quality active cabinet sub-woofers (SVS) that the installer ‘built-in’ and passive in-wall speakers (KEF). The in-wall sub-woofers just didn’t seem to have enough grunt!

I had originally thought that I would not want to listen to music in a windowless room, and so was not concerned with that aspect. But we ended up bi-amping the front in-wall speakers to improve their performance still further, and I would have to admit that I am frequently to be found sitting in the dark listening to CDs!  The system actually exceeds my expectations, and to my ear is really, really good!

On the second issue, we thought that it might not be a great time to buy a projector.  Because at last there seems to be some proper competition in 4K projectors, and my view was that projector quality would both improve and very high quality would become more affordable – but this would take a few years!  So we expected that the second issue would involve some compromise.

Ideally we wanted a 4K projector that was capable of frame interpolation when playing/upgrading to 4K – but without generating noticeable artefacts in the process and we didn’t want to pay a fortune for this!  The designer helped me choose the JVC DLA X7900, after auditioning various JVC, Epson and Sony models, for four reasons:

1.The previous JVC model had excellent contrast and the new model (that was not even reviewed when we selected it) was unlikely to be worse and our dedicated windowless room all-in-black assists getting first class contrast.

2.Native 4K projectors were either inordinately expensive, currently around the £25k mark, or gave what seems  to us a less good picture overall.

3.The latest JVC model (that we got) actually can add frames to UHD pictures. A real plus.

4.By keeping to a projector under £6k we could potentially allow ourselves an upgrade in a few years time, when competition may have driven prices down.

Again the picture quality exceeded expectations, so overall we are delighted.

What was so good about the designers and installers was their attention to detail, setting up the cinema and the hardware superbly, employing top class specialists for both sound and picture to get the very best from the chosen equipment.  They offered advice without pushing their own views or hardware options too hard and tried – with great success – to accommodate our (my!) foibles.”

If you want to find out more about our residential services or home cinemas then please do not hesitate to contact a member of our team!

Do NOT follow this link or you will be banned from the site!
We use cookies on our website to give you the most relevant experience by remembering your preferences and repeat visits. By clicking “Accept”, you consent to the use of ALL the cookies.
Cookie settingsACCEPT
Manage consent

This website uses cookies to improve your experience while you navigate through the website. Out of these, the cookies that are categorized as necessary are stored on your browser as they are essential for the working of basic functionalities of the website. We also use third-party cookies that help us analyze and understand how you use this website. These cookies will be stored in your browser only with your consent. You also have the option to opt-out of these cookies. But opting out of some of these cookies may affect your browsing experience.
Necessary Always Enabled

Performance cookies are used to understand and analyze the key performance indexes of the website which helps in delivering a better user experience for the visitors.

Analytical cookies are used to understand how visitors interact with the website. These cookies help provide information on metrics the number of visitors, bounce rate, traffic source, etc.

Advertisement cookies are used to provide visitors with relevant ads and marketing campaigns. These cookies track visitors across websites and collect information to provide customized ads.

Other uncategorized cookies are those that are being analyzed and have not been classified into a category as yet.