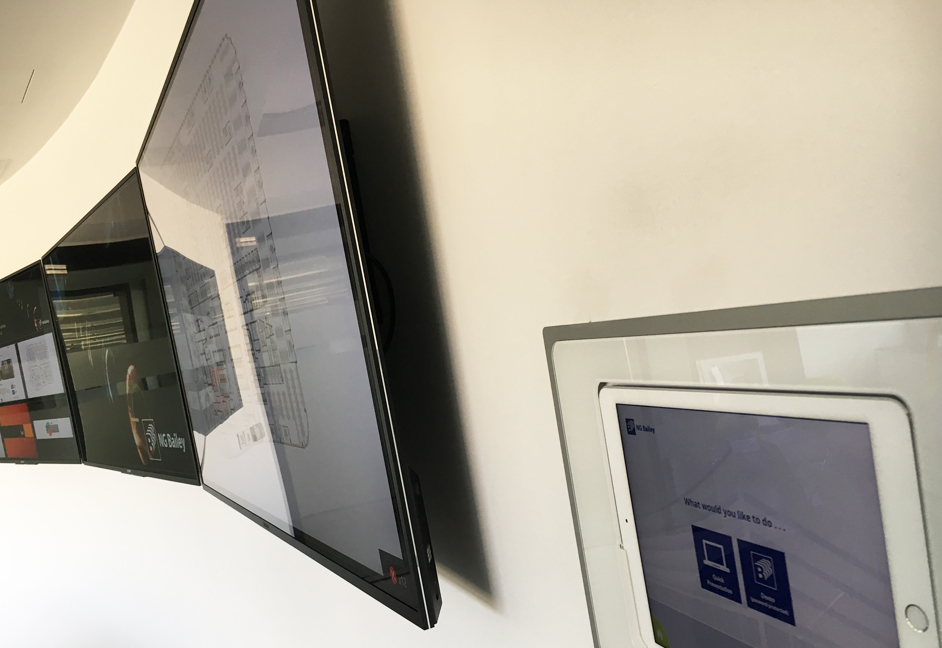 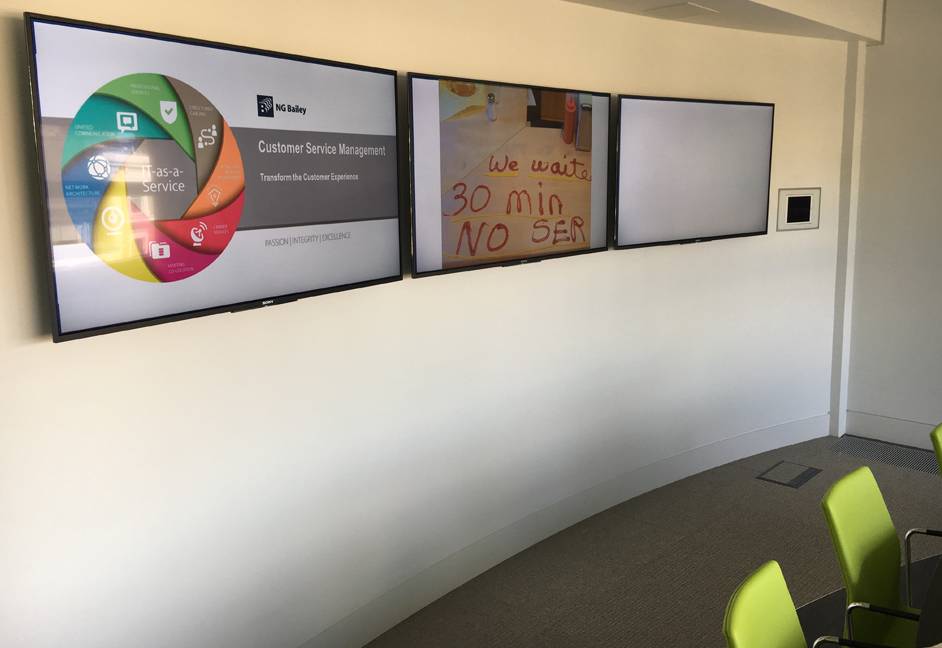 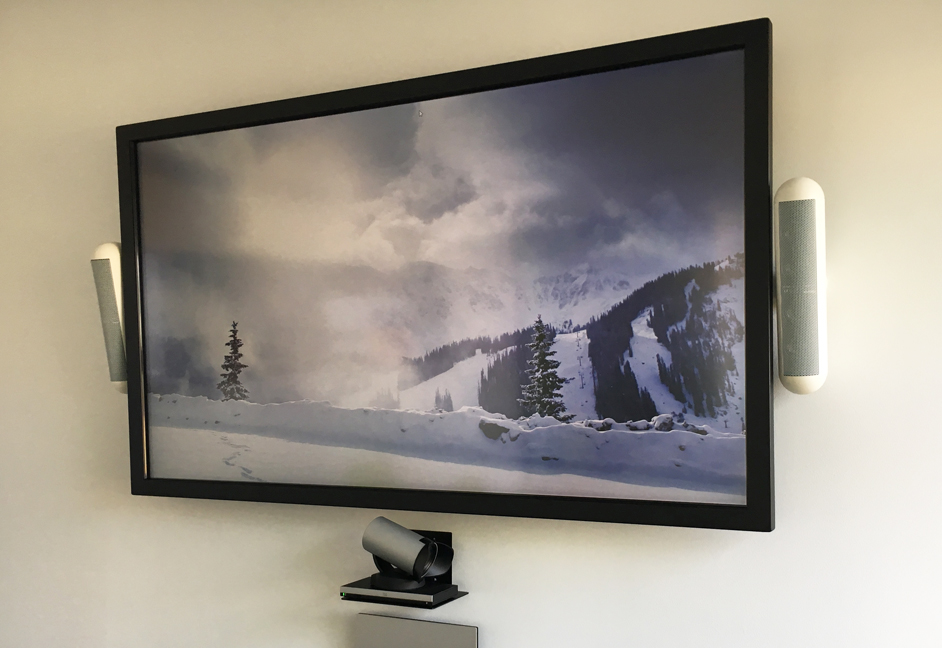 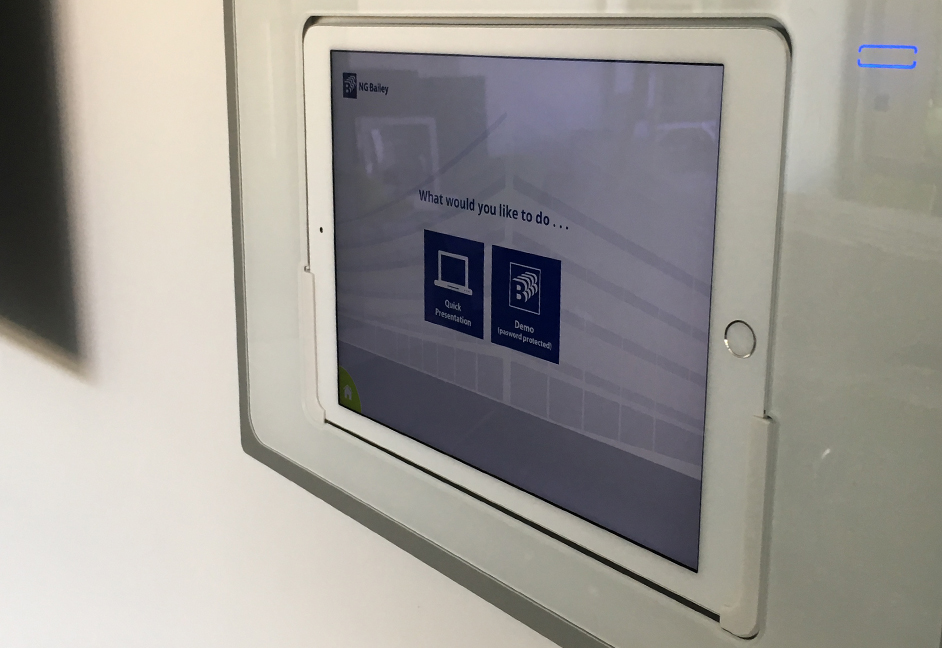 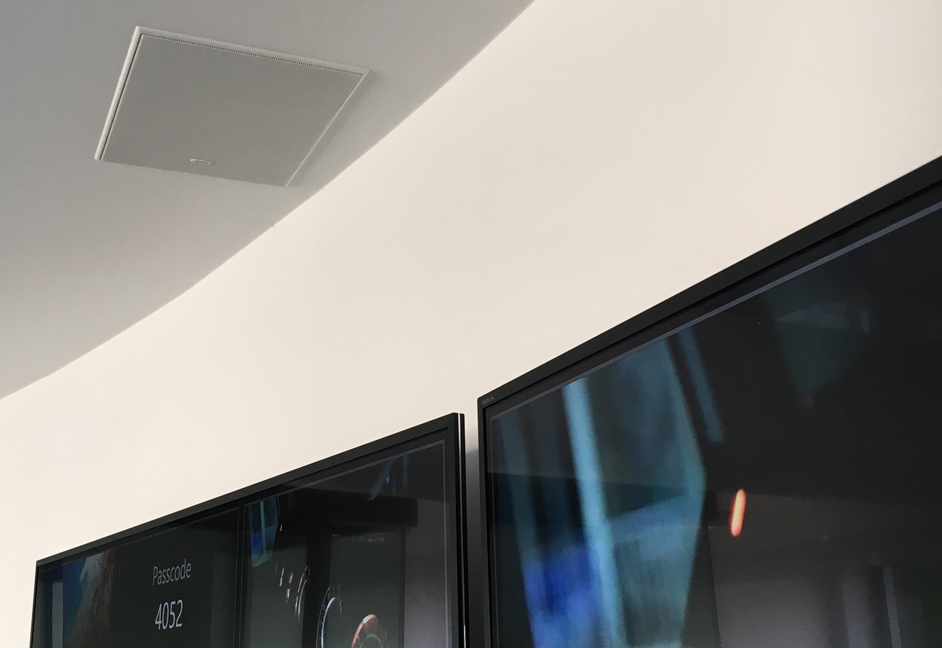 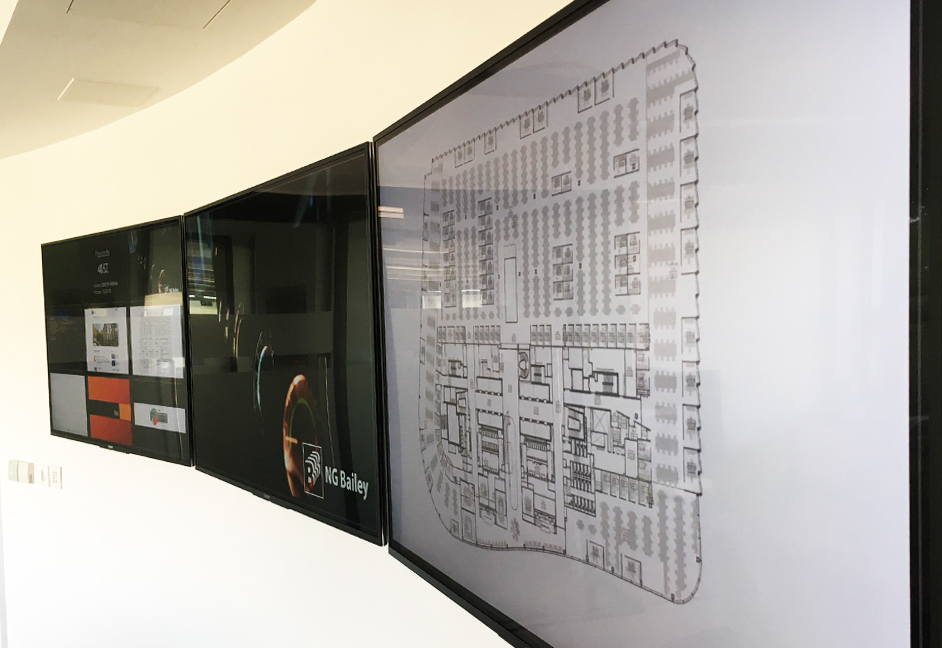 NG Bailey approached Pyramid to design and install a AV system for their multipurpose ‘Innovation Room’ in their new London HQ.

The move to the iconic Angel Building in Clerkenwell was an important one, designed to unite the company under one roof. With many stakeholders involved, we were delighted to work with NG Bailey on this high-profile project.

The client was keen to incorporate four 4K resolution display screens to allow viewing from multiple sources, including three client supplied PC’s and a Laptop location. All to be controlled via AMX software installed on an iPad.

A separate digital signage system was also required for a single location which would display content via a media player controlled across the client’s existing IT network from the receptionist location (or any other networked PC location).

Three 55” 4K resolution displays were wall mounted on adjustable brackets to allow for fine adjustment. Each screen was directly connected to the display outputs of the Sony Vision Presenter using 4k extender sets, which in turn had Google Chromecast and Apple TV units connected to it via HDMI. Three client supplied PC’s were connected directly to each respective screen using HDMI cabling.

An additional 65” 4K display was mounted on the adjacent wall with the same functionality as the other displays within the room, with the exception of a PC input.

A connection was also made available for a Cisco SX20 Codec housed within the meeting room, with the signal extended via an HDMI balun set, which was then then linked to the Vision Presenter as a source.

The audio was taken from the output of the PC’s codec and balun receiver of the Sony Vision Presenter and connected directly into an audio matrix switcher. This matrix switcher was then routed to the audio by two Bose amplifiers, which replicated the audio through either two KEF custom install in-wall speakers, or two Audica surface mount speakers (mounted either side of the single 65” display).

The KEF speakers were selected due to their high-quality sound reproduction across all frequencies, but most importantly because they had to be mounted bulkhead above the screen position.  All that was visible was the square speaker grill.

We specified an AMX NX1200 processor to control the system. The unit communicated with the screens via TCP/IP and was integrated with the building network via a client supplied Cisco network switch. We also utilised an AMX EXB-REL-8 unit for the necessary relay connections for the blind controls.

The AMX processor controlled the audio routing to the Bose amplifiers and was able to mute/ unmute the relevant speakers depending on which screen was being viewed.

Working closely with the client, we designed and programmed a custom user interface for an iPad to ensure simple intuitive operation of the system. This was wall mounted, along with a secure touch code docking system which allowed the iPad to be released for portable use when required, or securely locked in place when not in use / restricted user access applied.

A wireless Gyration USB keyboard / air mouse connected to the PC’s via a USB switcher, whilst the Sony Vision Presenter was controlled by an overlay on the 65” screen.

A 32” wall mounted screen was installed in the Lobby to allow independent content to be displayed via a BrightSign digital signage player. The signage player was connected to the building network to allow content for the player to be managed remotely from any network PC location.

With lots of stakeholders involved, we worked closely with the NG Bailey Team to ensure the delivery on site and system functionality was flawless. The client continues to enjoy using their meeting facilities and we look forward to working with them on future projects.

If you want to find out more about our Commercial AV or Audio Visual System Design Consultancy services than please do not hesitate to contact a member of our award-winning team.

Do NOT follow this link or you will be banned from the site!
We use cookies on our website to give you the most relevant experience by remembering your preferences and repeat visits. By clicking “Accept”, you consent to the use of ALL the cookies.
Cookie settingsACCEPT
Manage consent

This website uses cookies to improve your experience while you navigate through the website. Out of these, the cookies that are categorized as necessary are stored on your browser as they are essential for the working of basic functionalities of the website. We also use third-party cookies that help us analyze and understand how you use this website. These cookies will be stored in your browser only with your consent. You also have the option to opt-out of these cookies. But opting out of some of these cookies may affect your browsing experience.
Necessary Always Enabled

Performance cookies are used to understand and analyze the key performance indexes of the website which helps in delivering a better user experience for the visitors.

Analytical cookies are used to understand how visitors interact with the website. These cookies help provide information on metrics the number of visitors, bounce rate, traffic source, etc.

Advertisement cookies are used to provide visitors with relevant ads and marketing campaigns. These cookies track visitors across websites and collect information to provide customized ads.

Other uncategorized cookies are those that are being analyzed and have not been classified into a category as yet.